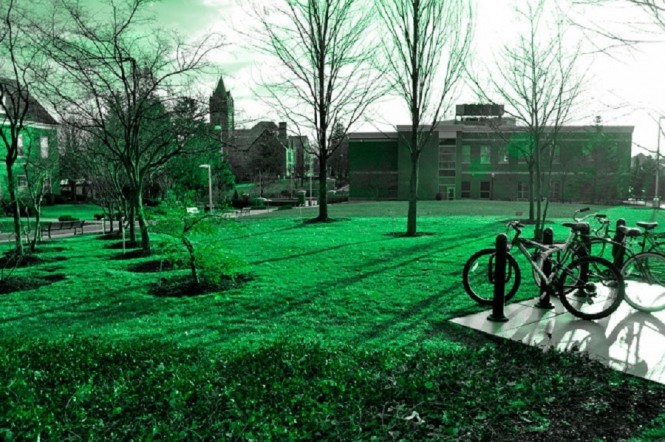 There’s a familiar name among the 1,219 who signed the “We Are Still In” document in support of the Paris Agreement and its efforts to combat climate change.

“It is imperative that the world know that in the U.S., the actors that will provide the leadership necessary to meet our Paris commitment are found in city halls, state capitals, colleges and universities, investors and businesses,” the document states. “Together, we will remain actively engaged with the international community as part of the global effort to hold warming to well below 2℃ and to accelerate the transition to a clean energy economy that will benefit our security, prosperity, and health.”

There are many reasons for Ohio Wesleyan to sign the document, Jones said. Perhaps most notable is the pioneering work of F. Sherwood Rowland, Ph.D., a 1948 OWU graduate.

A Delaware native, Rowland earned the 1995 Nobel Prize in chemistry for his work studying chlorofluorocarbons (CFCs). His research led to significant discoveries in the field, including that chemicals in aerosol sprays, air conditioners and foam insulation were damaging the oxygen layer surrounding the earth’s atmosphere.

At a White House climate change roundtable in 1997, Rowland spoke passionately on behalf of scientists concerned about global warming: “Isn’t it a responsibility of scientists, if you believe that you have found something that can affect the environment, isn’t it your responsibility to do something about it, enough so that action actually takes place? If not us,” Rowland said, “who? If not now, when?”

Woodrow W. Clark II, Ph.D., a 1967 Ohio Wesleyan alumnus, also made an impact through his efforts to protect the environment as one of 30 members of the Intergovernmental Panel on Climate Change (IPCC). The IPCC was a co-recipient of the 2007 Nobel Peace Prize, along with former U.S. Vice President Al Gore, for the film “An Inconvenient Truth.”

The spirit of “We Are Still In” also connects well with Ohio Wesleyan’s academic program and the April announcement that it was creating an Environment and Sustainability Program with a new environmental science major this fall, Jones said.

The Environment and Sustainability Program will include the collaboration of nearly 20 Ohio Wesleyan faculty members who specialize in the natural sciences, social sciences, arts, and humanities. One of the program’s highlights its innovative “Conversations: Toward a Sustainable Future” course. Students will take the course twice – once as newly declared environmental science majors and once as seniors in the program – to provide both a cornerstone and capstone for their study of ecological issues.

“In 2013, the entire campus focused attention on the ‘Interdisciplinary Impacts of Climate Change’ through the Sagan National Colloquium,” Jones said. “The Colloquium’s founding vision of connecting the liberal arts with civic arts – studying a topic and taking action in response to that study – is reflected in our signing of the ‘We Are Still In’ document.”

Learn more about the “We Are Still In” initiative at http://wearestillin.com.