NextGen Climate is currently seeking detail oriented and highly motivated students to join our team in key states as stipend Fellows through the 2016 General Election. 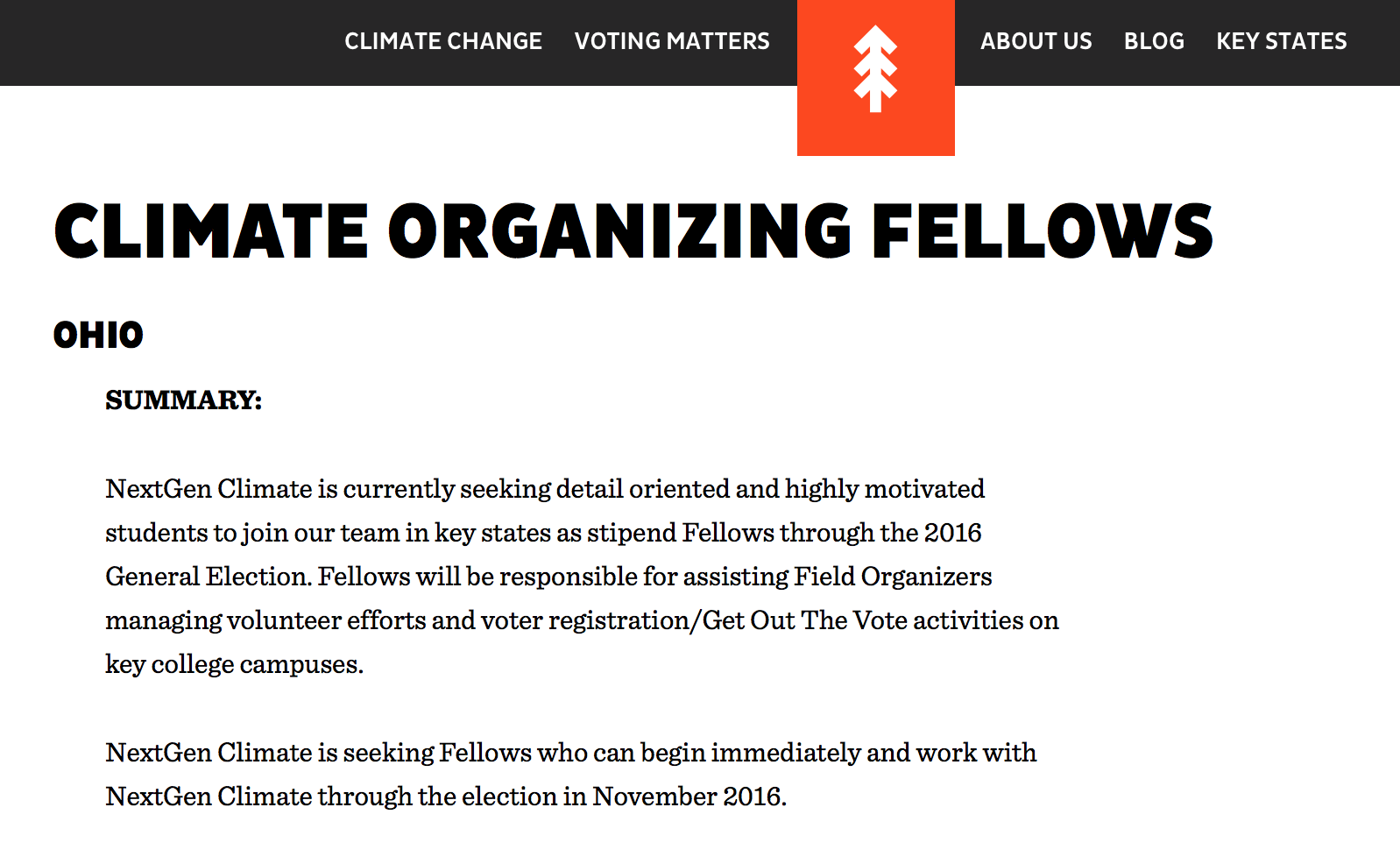 SUMMARY: NextGen Climate is currently seeking detail oriented and highly motivated students to join our team in key states as stipend Fellows through the 2016 General Election. Fellows will be responsible for assisting Field Organizers managing volunteer efforts and voter registration/Get Out The Vote activities on key college campuses.

NextGen Climate is a San Francisco-based environmental advocacy organization. Founded by businessperson and philanthropist Tom Steyer in 2013, we act politically to prevent climate disaster and promote prosperity for all Americans. Working at every level, we are committed to supporting candidates, elected officials, and policymakers across the country that will take bold action on climate change.

An update on OWU’s Environmental Studies Program as the fall 2016 semester starts. 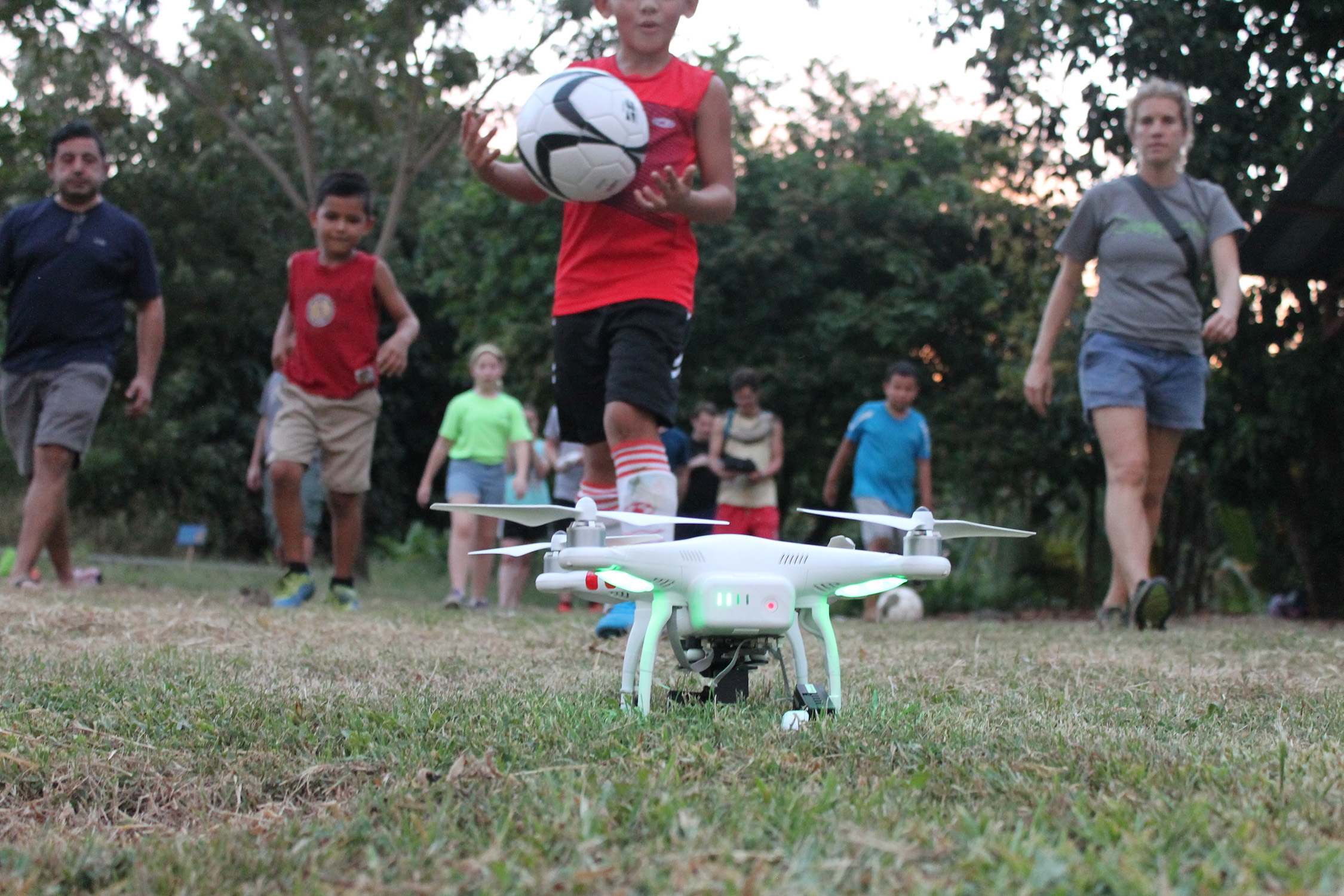 An update on OWU’s Environmental Studies Program as the fall 2016 semester starts.

2015-2016 academic year developments are listed on an earlier post on the OWU Environment & Sustainability Blog.

A few additional developments are worth noting:

Of obvious importance is the proposal for transforming our nearly 40 year old Environmental Studies program into Environmental Sustainability, part of the campus-wide effort to expand enrollment. The proposal was compiled by a group of faculty, Ellen Arnold, Amy Downing, Chris Fink, and John Krygier, drawing from 5 years of efforts by ES faculty, staff and students, including content drawn from:

The Environmental Sustainability Major, if approved by faculty (the vote should happen at the Monday September 19, 4:30 pm faculty meeting), will have three tracks: Food, Climate, and Sustainability. All will involve a significant amount of applied work, theory-into-practice, and internships.

Collaborative efforts with Chris Fink (HHK) over the past few years fleshed out the Food Track in the proposed new major. Much of this is embodied in the Food Minor, passed at the last faculty meeting in the spring. We are formalizing connections with Stratford Farm and the Seminary Hill Farm south of campus, where we placed a dozen or so interns last academic year.

The addition of Nathan Amador to the faculty was central in solidifying our Climate Track for the proposed major. Nathan and Craig Jackson have led the effort on the Climate front.

Finally, the Sustainability Track in the major is the result of the work of faculty, staff and students over the past decade. In particular, Sean Kinghorn (sustainability coordinator, 2012-14), B&G’s Peter Schantz, Chartwell’s Gene Castelli, staff in Res Life and other folks who helped guide well over 100 student sustainability projects.

Laurie Anderson’s efforts have been central to all three tracks in the proposed program, and sustainability on campus in general.

Recent past Sagan National Colloquiums have also infused our proposal with ideas: Sustainability (2008-09), Food (2012-13), Climate (2013-14), Water (2014-15) and Waste (2015-16). All brought an array of scholars to campus, driving home the point that all these environmental and sustainability issues are of significant importance.

Nathan Amador and student Todd D’Andrea spent several weeks in southern Costa Rica this summer, collaborating with Amy Work (OWU ’04) on what we hope will be a long-term component of the Environmental Sustainability program, looking at the local impacts of global environmental change. Nathan organized and led a travel learning course (Fall 2015) that had students working with Amy over the semester break (2015-16) and we plan to return with another travel learning course in the fall of 2017. More info on Amy’s efforts are here.

Thanks to all who have contributed to our efforts over the years: your work is now part of the Environmental Sustainability proposal.

The Sustainability Task Force (STF) initiated in 2008 has been instrumental in moving sustainability forward on campus. Contact Nathan Amador for the date and time of the next STF meeting (and let him know if you want to be added to the STF mailing list). It is open to all.

Finally, last academic year, Jim Peoples, Nick Crane (now at the University of Wyoming) and I managed the Luce Foundation funded initiative on Sustainability in Asia and the West, with a focus on waste and discard studies. This effort, a collaboration between OWU’s East Asian Studies and Environmental Studies Programs, moves forward with an implementation grant we are currently writing. Obviously this effort will sync nicely with the proposed Environmental Sustainability Program. It also corresponds nicely with the development of a Global Studies Center on campus, headed up by Jeremy Baskes, and part of the GLCA’s Global Crossroads program.

Again, thanks for all the efforts on what has been a great cross-disciplinary collaboration between faculty, students, staff and alumni over the past five years.

An internship opportunity from John Romano (OWU 2012) who works for the Transparency, Accountability and Participation (TAP) Network at the United Nations.

An internship opportunity from John Romano (OWU 2010) who works for the Transparency, Accountability and Participation (TAP) Network at the United Nations.

The Transparency, Accountability & Participation (TAP) Network is a broad network of civil society organizations (CSOs) that works to ensure that open, inclusive, accountable and effective governance is at the heart of the 2030 Agenda, and that civil society are recognized and mobilized as indispensable partners in the design, implementation of and accountability for sustainable development policies, at all levels.

The TAP Network engages some of the foremost expert organizations on the issues of transparency, accountability and participatory governance. TAP benefits from the invaluable expertise, experiences and unique perspectives of its members, all of whom come together to collaborate on joint work and common positions under the TAP Network umbrella. This work is underpinned by recognition that we maximize reach and influence when many stakeholders speak with a unified voice.

The work of the TAP Network is funded by grants from a group of generous donors, including the Open Society Foundations, Hewlett Foundation and the Omidyar Network.

You can find more about the work of the TAP Network at www.tapnetwork2030.org

TAP’s vision for the 2030 Agenda is framed by notions of rule-of-law and the TAP principles of transparency, accountability, and citizen participation, as well as respect for human rights. Effective governance in a 2030 Agenda world requires transparent, participatory and inclusive institutions that are accountable to the very people that the 2030 Agenda intends to engage.

The TAP Network is united in the belief that open, inclusive, accountable and effective governance is both an outcome and an enabler of sustainable and equitable development. The 2030 Agenda framework must promote openness, accountability and effective public institutions, build trust between states and its citizens, and empower civil society to engage in the design, implementation and accountability of public policies, at all levels.

TAP’s work also reflects the will and impetus of the millions of citizens from around the world who voted for ‘an honest and responsive government’ as one of their top priorities in the My World survey – a theme echoed in consultations with people around the world.

To ensure that the TAP principles and inclusive governance underpin the 2030 Agenda, the TAP Network works towards the following objectives:

The World Federation of United Nations Associations (WFUNA) is the host organization for the TAP Network, which entails accepting and managing grant funds and hosting the project staff.

TAP is currently seeking an Intern who will support the TAP Network Coordinator in the administrative management of the Network, as well as in advocacy, communications and knowledge management for the issue of transparency and accountability in the 2030 Agenda. The intern contract will run for six months.

He/she also will have general WFUNA staff duties.
He/she reports to TAP’s Coordinator
The position is based in WFUNA’s New York office.
To apply the applicant must have a valid U.S. work permit
The main responsibilities of the position will include the following:

The September 2016 Newsletter of the Association for the Study of Food and Society (ASFS) includes information about OWU’s new Food Minor. It is worth taking a look at the newsletter and also the ASFS organization to get a sense of the breadth of ideas and topics within the emerging field of food studies / food and society.

Dr. Chris Fink passed along a link to the September 2016 Newsletter of the Association for the Study of Food and Society (ASFS) which includes information about OWU’s new Food Minor (detailed in an earlier post).

It is worth taking a look at the newsletter and also the ASFS organization to get a sense of the breadth of ideas and topics within the emerging field of food studies / food and society.

Emily Webb (below, left), originally from Troy, Michigan, graduated Phi Beta Kappa with majors in Zoology and Environmental Studies. She is a member of both the The Wilson Ornithological Society and American Ornithologists’ Union. She’s all about the birds. This fall, she is beginning a PhD in Biology at Arizona State University in Tempe, AZ. Her research at ASU will be with Dr. Kevin McGraw studying bird coloration.