OWU’s Spring 2015 May Move Out focused on getting students to donate reusable items to Goodwill (by placing them in storage pods) while moving out of the dorms. Overall about 19,000 pounds of material was collected by Goodwill throughout the May Move Out period. That is about 9.5 tons of material kept out of the landfill (and close to our estimated 10 ton diversion rate). 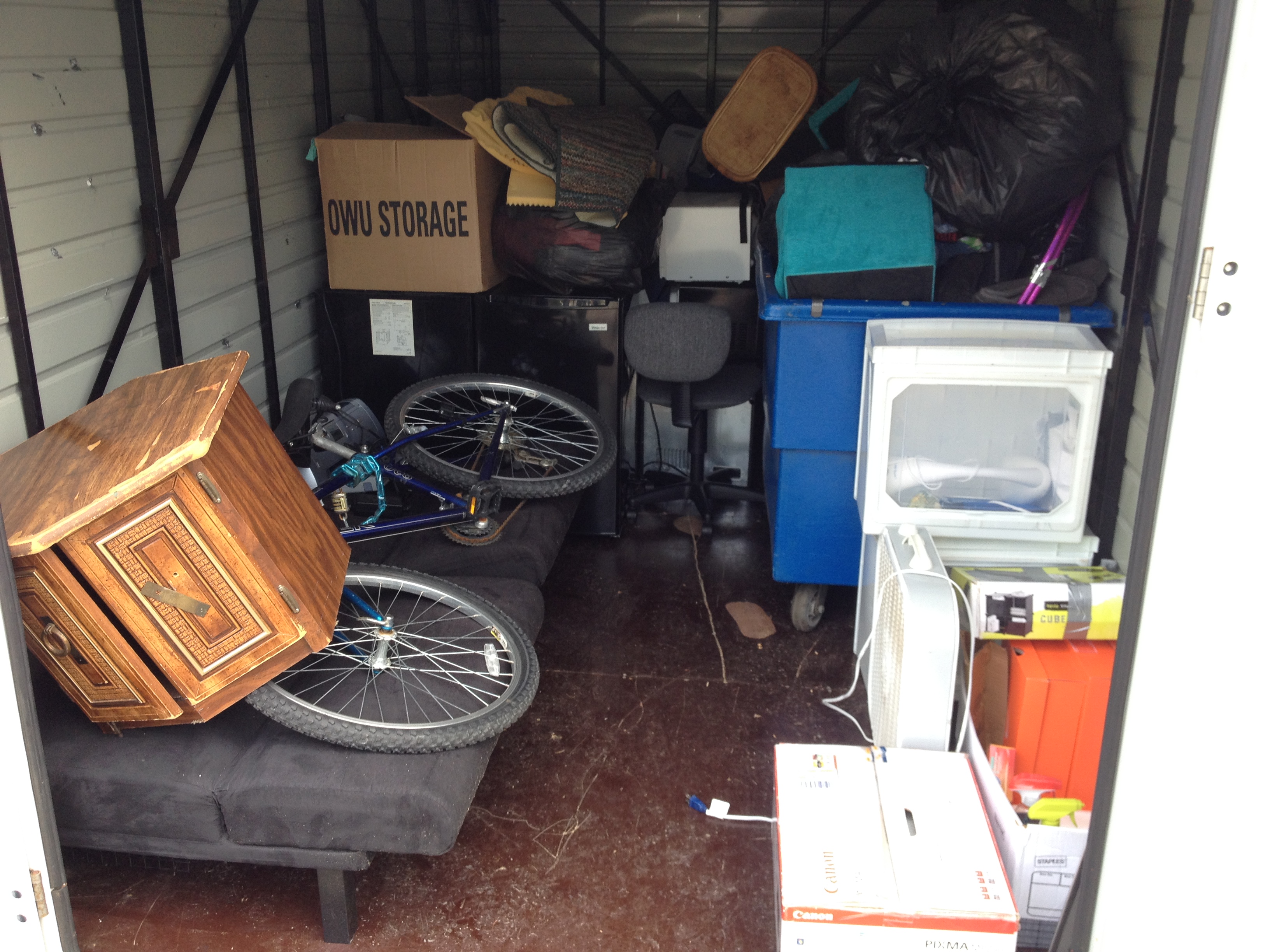 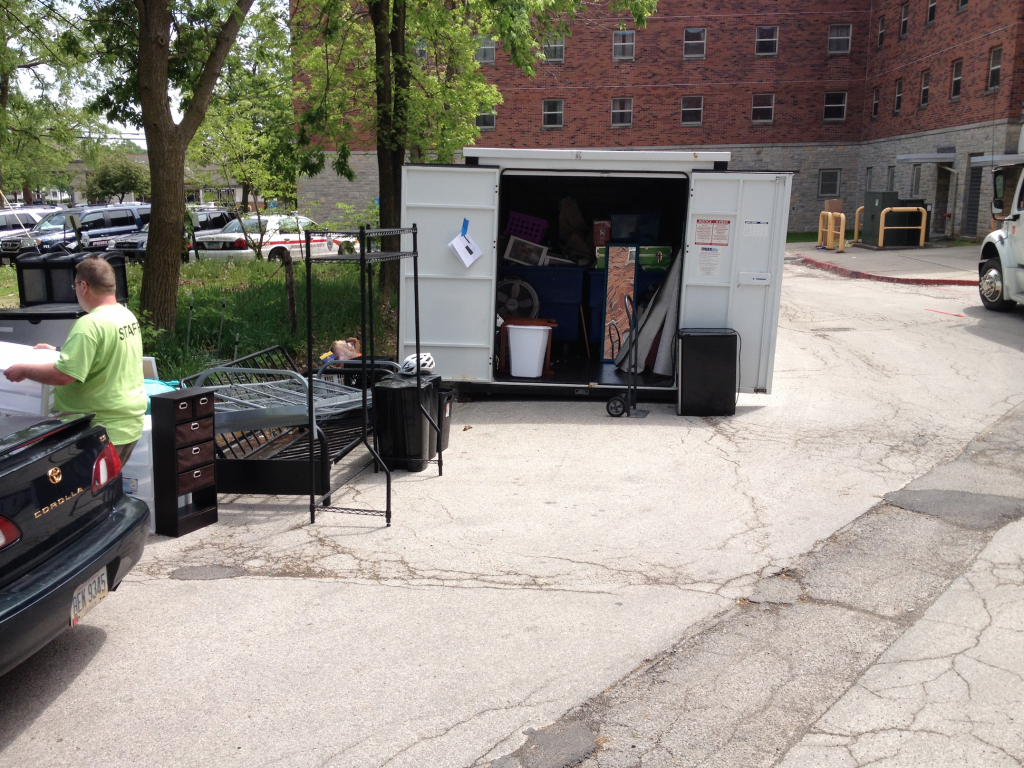 OWU’s Spring 2015 May Move Out focused on getting students to donate reusable items to Goodwill (by placing them in storage pods) while moving out of the dorms. The effort worked well given our goals of diverting stuff from the landfill (and to Goodwill) while clearing the dorms (in preparation for their summer use).

Overall about 19,000 pounds of material was collected by Goodwill throughout the May Move Out period. That is about 9.5 tons of material kept out of the landfill (and close to our estimated 10 ton diversion rate).

Overall, we rate the effort a B with areas of improvement to include promotion and logistics. 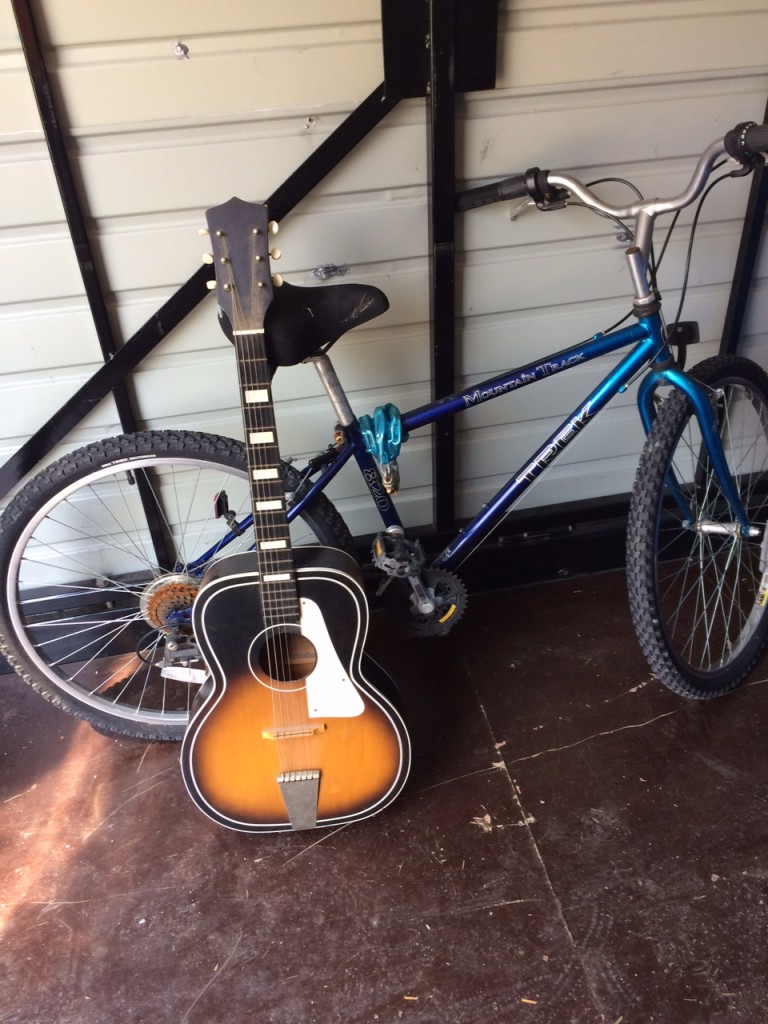 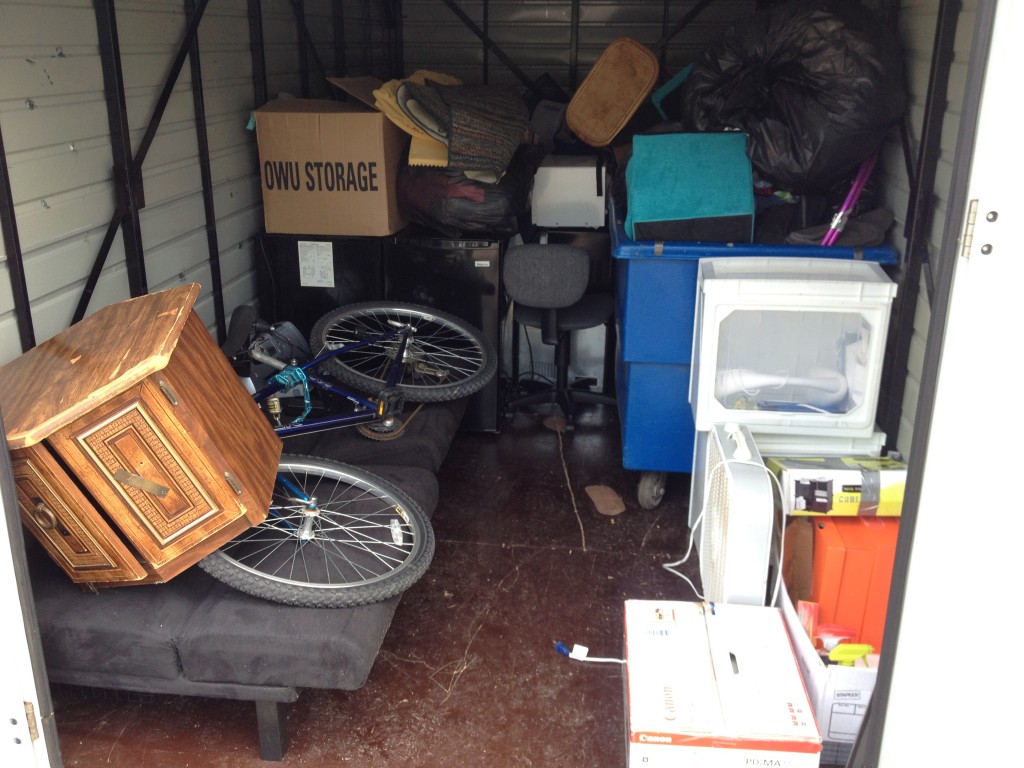 Of the larger items, according to Goodwill, we collected 45 mini refrigerators, 12 bins of textiles, 37 misc. wares, 13 futons, 14 office chairs, 18 rugs, 27 storage containers and a dozen or so misc. chairs.

Our Goodwill partners were very happy with the effort, as were OWU’s Buildings and Grounds and Residential Life staff. In other words, we have a model that can, with some tweaks, work in the future.

With overall success come a series of problems and proposed improvements to consider.

Problem: Promotional efforts did not work as well as possible. This will be a big challenge for May Move Out 2016. 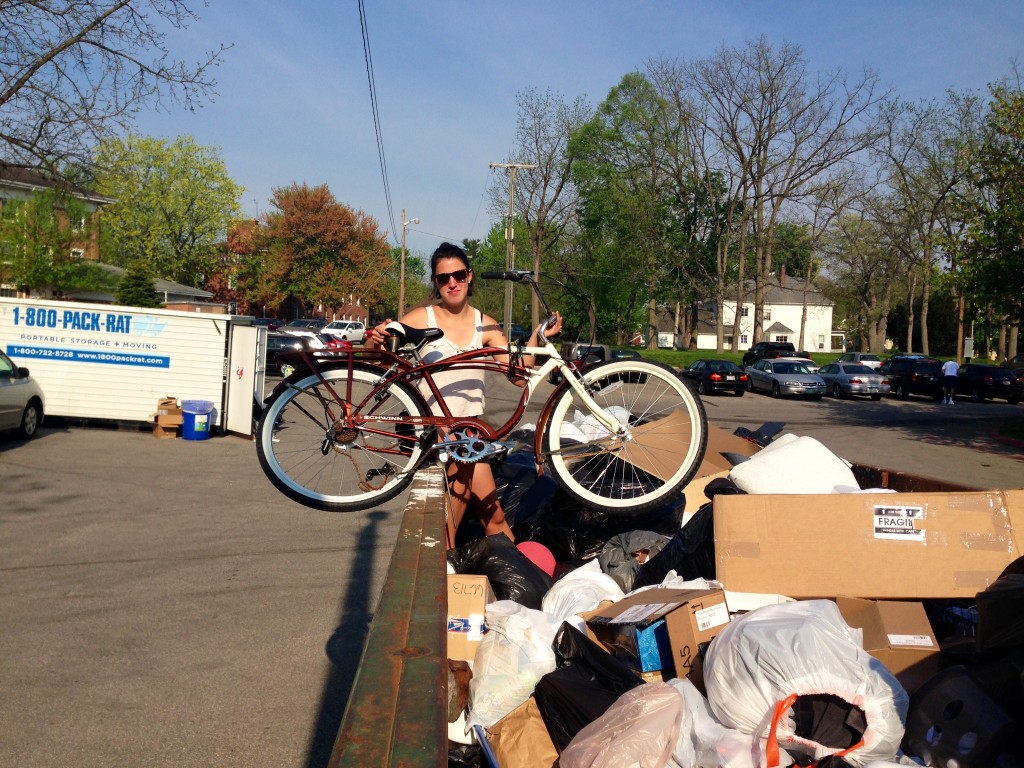 Michelle Smith pulling a nice bike out of the dumpster. Potential donations were removed from the dumpsters by May Move Out volunteers. When asked, a signficant number of students professed ignorance of the May Move Out effort.

Problem: Lots of recyclable material, particularly paper and cardboard, in the dumpsters. Part of the problem is the lack of a recycling program in the City of Delaware for businesses and multi-tenant buildings (such as the dorms on campus). 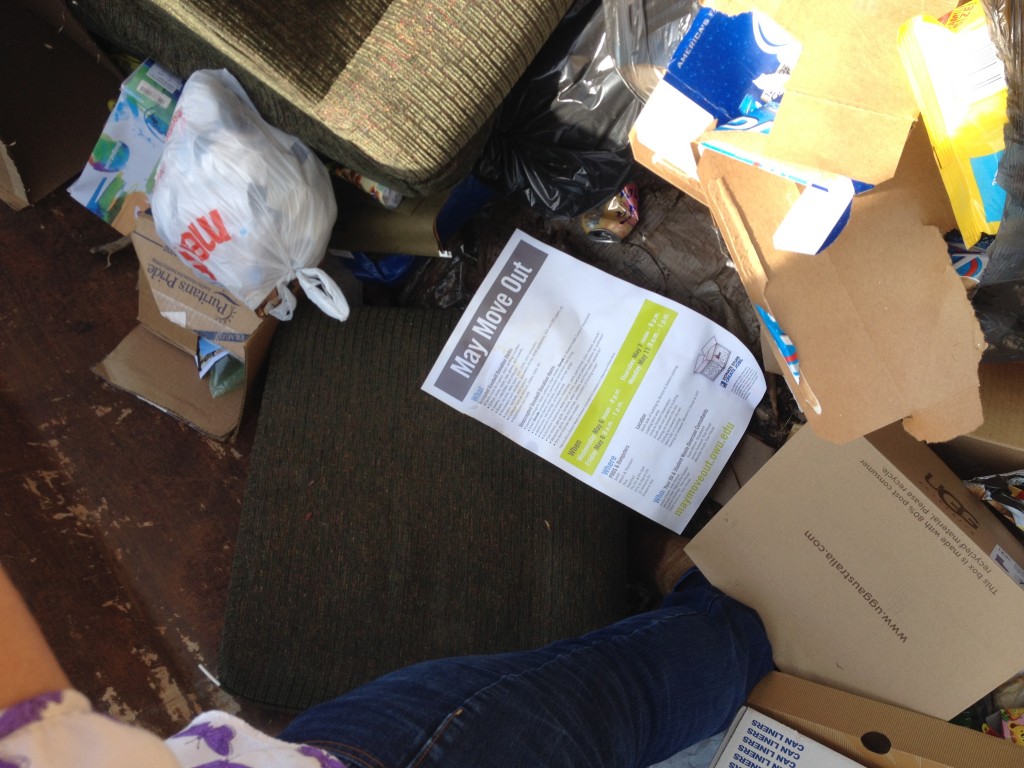 A May Move Out promotional poster (above) in the dumpster! 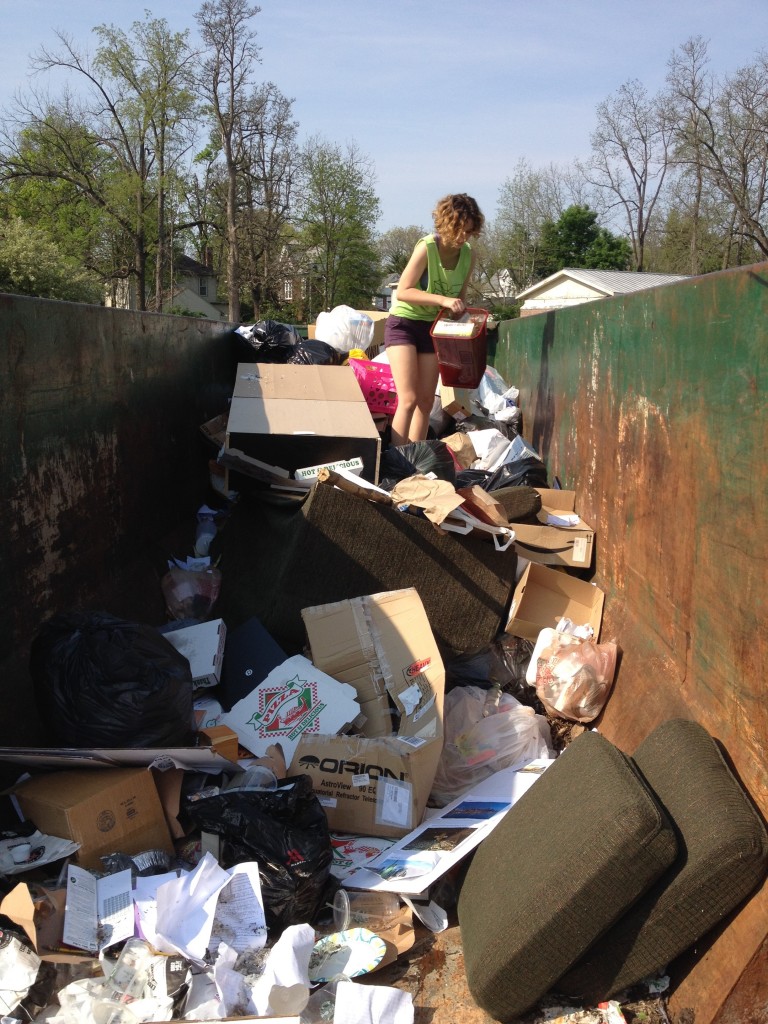 Lots and lots of paper and cardboard in the dumpsters.

Problem: Limited donation dates and times meant that materials that could have been donated were thrown in dumpsters (for example, over night when the donation pods were locked). 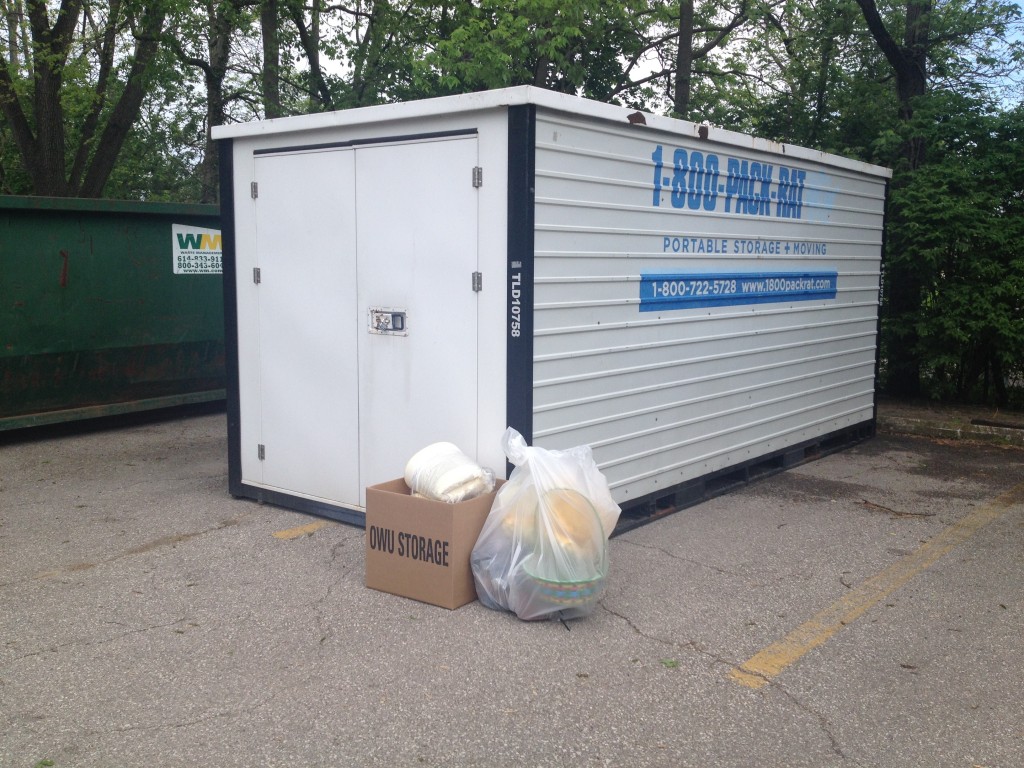 Donations left by a locked donation pod overnight (above).

Problem: Students have a tendency to toss everything (including potential donations) in the closest dumpster or garbage can. 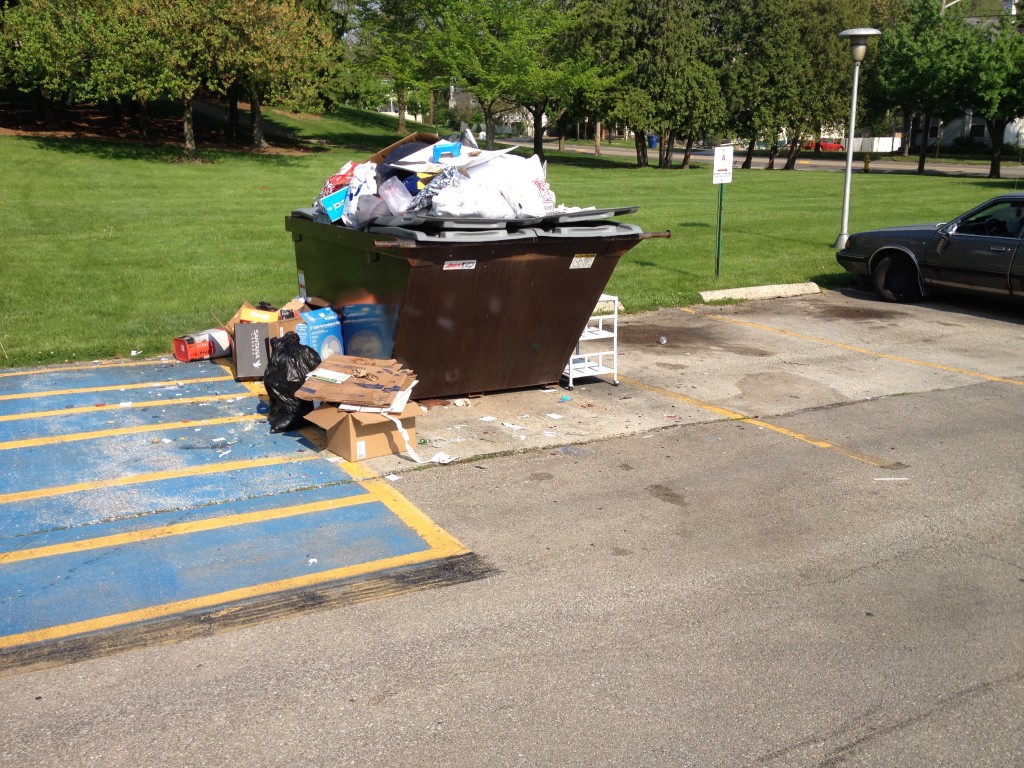 Potential donations in a dumpster that was closer to the dorm than the donation pod. 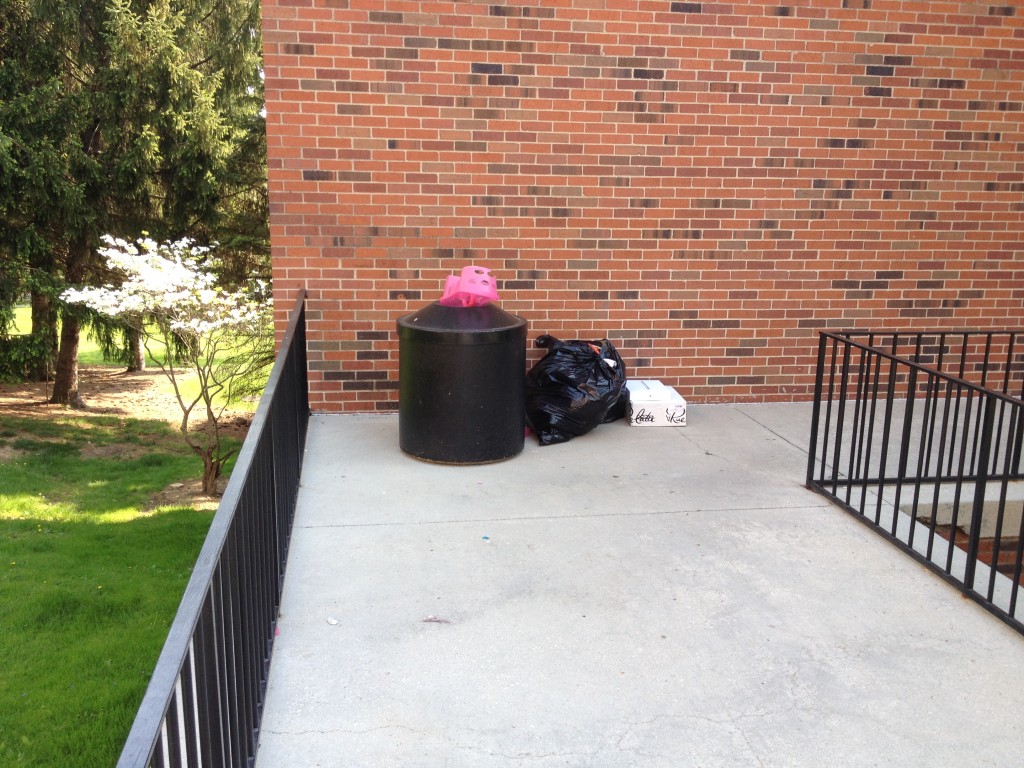 Potential donations dropped off by the trash can closest to the dorm exit.

Problem: too many nearly unused donation pods near SLUs and Frats. 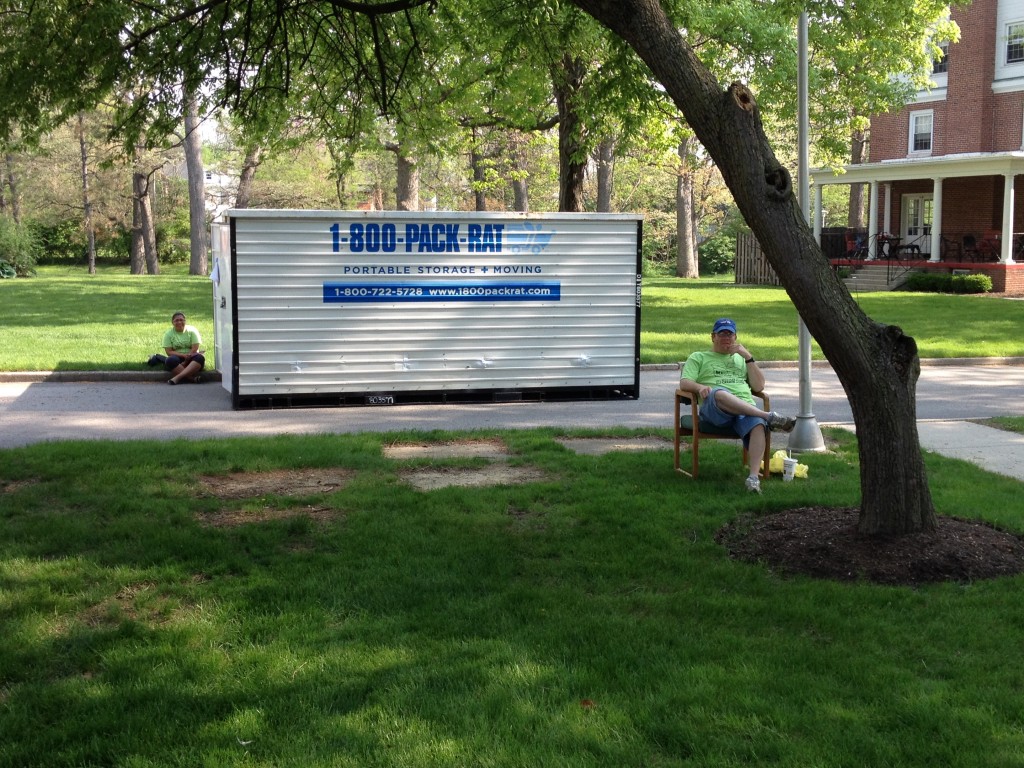 Things were very quiet at the donation pods near the SLUs (Small Living Units) and Frats.

Solution: This is actually a good thing, as it means we will probably need fewer donation pods for the Spring 2016 May Move Out (saving some money). 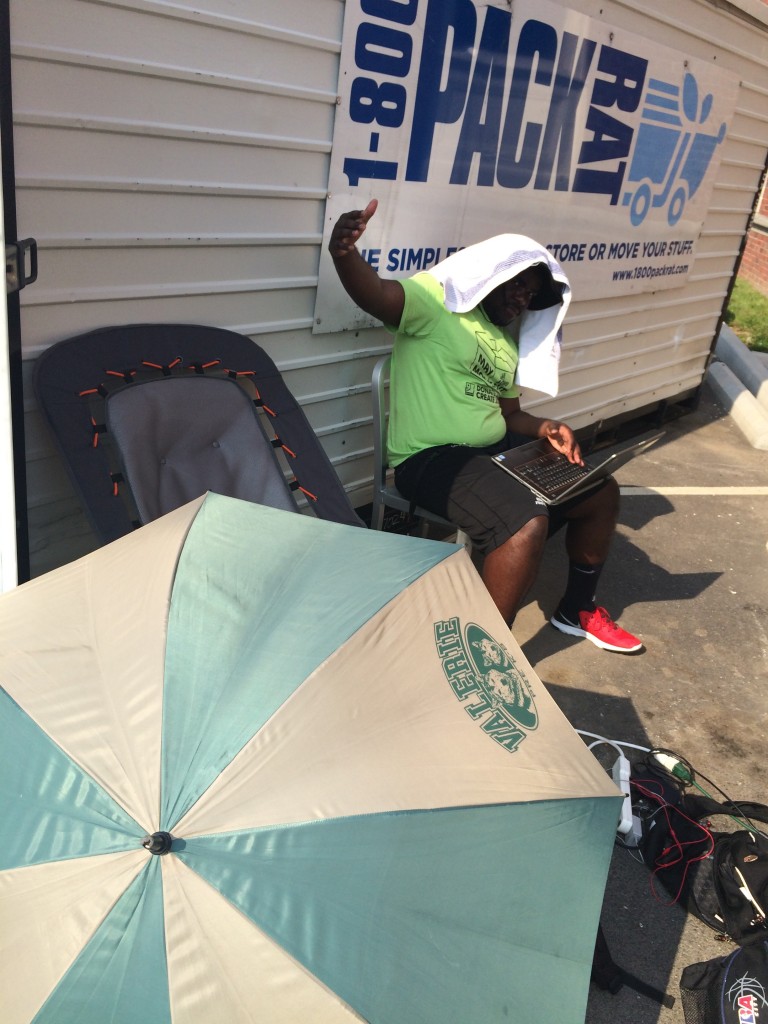 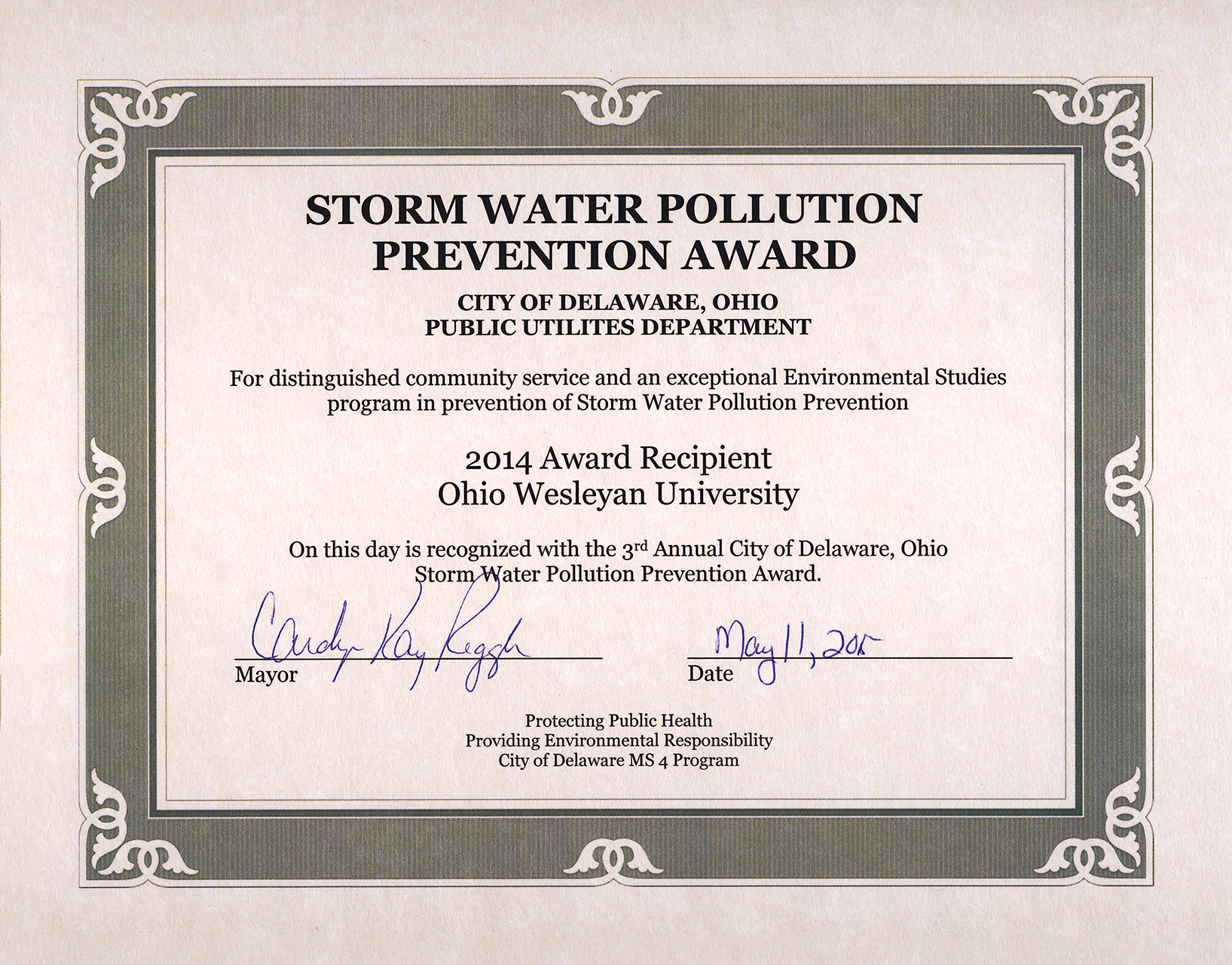 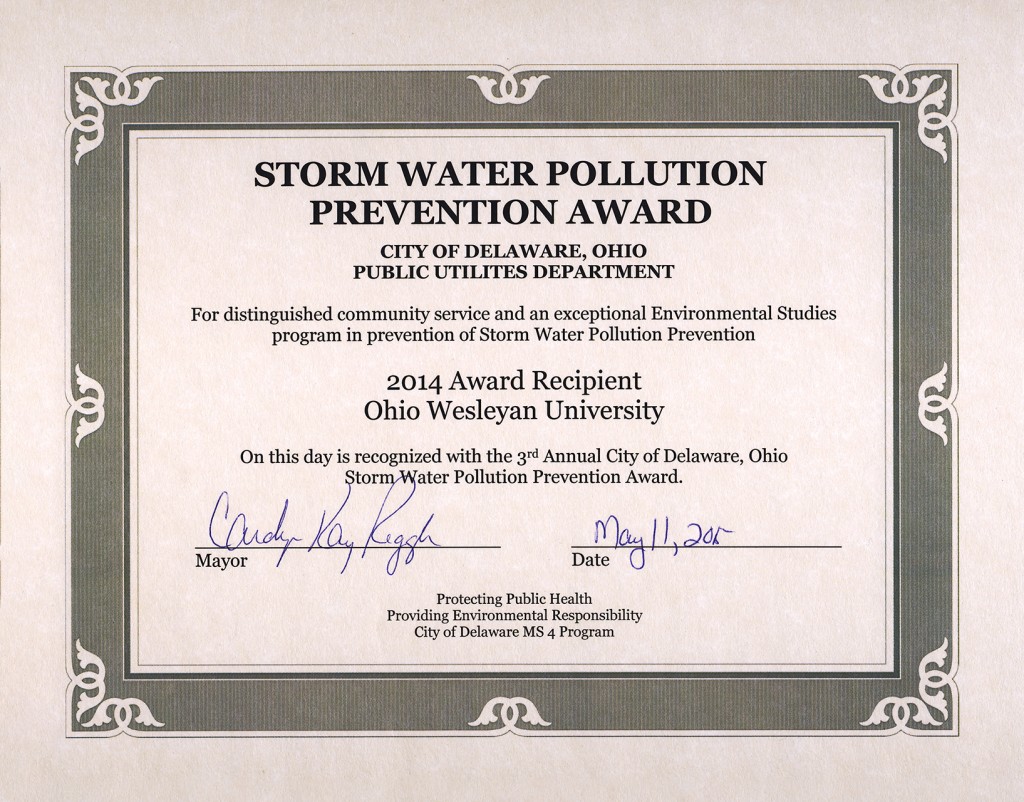 The City of Delaware strives to reduce pollutants and improve water quality in our community using several methods of outreach and clean-up events each year. This effort cannot be accomplished alone but with the help of community members, like Ohio Wesleyan University, our efforts have become successful. Each year the City of Delaware recognizes a local business or organization that demonstrates efforts of reducing pollutants and improving storm water through our MS4 (Municipal Separate Storm Sewer System) program. The City is pleased to announce that Ohio Wesleyan University and their environmental studies program has been selected as the 2014 Storm Water Pollution Prevention Award winner.

Efforts mentioned in the award include numerous organized stream and river cleanups, water quality grants and projects, a floating wetlands project, Water Week at OWU, and research and proposals for naturalizing the Delaware Run adjacent to campus.