Earlier this year a posting about Bird, Bee & Bat Habitat on OWU’s Campus detailed the construction and placement of, among other things, a series of bird houses and feeders on OWU’s campus. Dick Tuttle has documented the bird’s use of the houses and feeders over the summer and provides the following report. 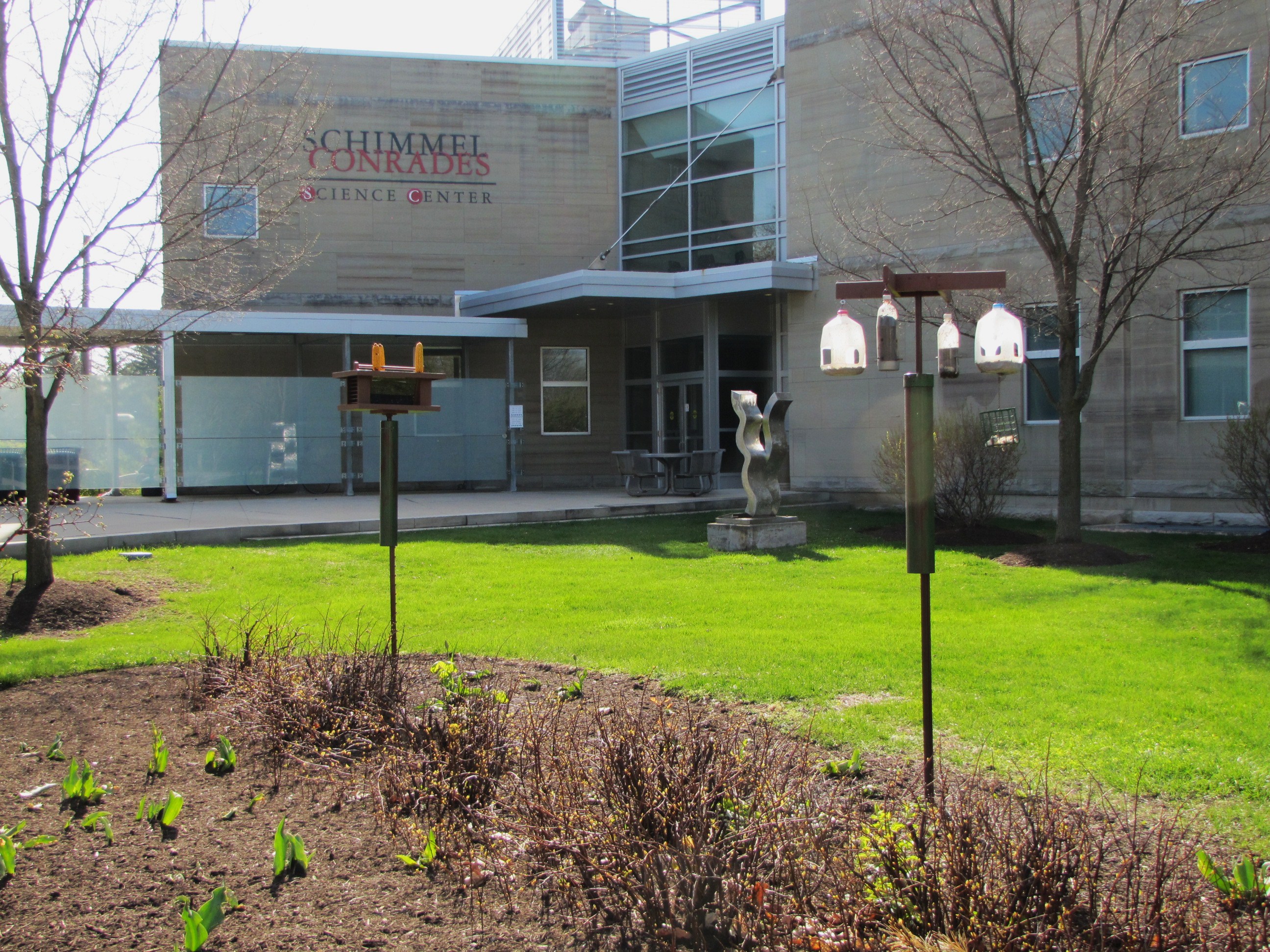 Earlier this year a posting about Bird, Bee & Bat Habitat on OWU’s Campus detailed the construction and placement of, among other things, a series of bird houses and feeders on OWU’s campus by Jayne Ackerman (OWU ’15, jjackerm@owu.edu), Blake Fajack (OWU OWU ’16, zbfajack@owu.edu) & Dick Tuttle (OWU ’73, ohtres@cs.com).

Dick has documented the bird’s use of the houses and feeders over the summer and provides the following report.

All four nestboxes with 1-1/8 inch entrances produced a total of 23 native birds. The small entrance holes are designed to exclude non-native House Sparrows. Here is a detailed report on those boxes. Boxes #1 and #2 are in the back yard of the Tree House. Box #1 raised six House Wrens with the box being active with eggs and young from May 16 – June 19. Box #2 fledged five House Wrens and was active between July 6 and August 7.

Box #3 stands at the corner of the Student Observatory directly north of the Tree House and across a parking lot. House Wrens caused two chickadee nest attempts to fail before the wrens raised six young after laying their first egg on June 16 and fledging their last nestling on July 19.

Box #4 is located among evergreen trees between the Hamilton-Williams Campus Center and the Mowry Alumni Center. A first nest attempt by Carolina Chickadees failed after four eggs were laid but the second nest was successful between May 2 and June 6 to fledge six chickadees. I have not removed the old nest from this box.

A Wood Duck box located between Delaware Run (creek) and Henry Street remained inactive all season. Perhaps, lights from the stadium are a problem. Relocating the large nest box should be considered once Delaware City completes their plans for the stream where it runs through campus. Wood Duck boxes can also raise Eastern Screech Owls.

On April 13, 2015, students Jayne Ackerman and Blake Fajack and I installed four Carolina Wren boxes on two Student Living Units after three or so other students helped with construction and painting. I did not check these boxes until the end of the season and I only looked at them from the ground. The two boxes at the Inter-Faith House showed no signs of use while one of two boxes at the Citizens of the World House had nesting material sticking above the entrance slot. The box had been active and is located near the ceiling of the carport. My advice is to leave the nest material in the box so Carolina Wrens can roost in it this winter. If the nest contains any moss, it belongs to a Carolina Wren. A House Sparrow’s nest will not have moss, but will have grass with some trash items, etc.

I serviced the bird feeder station in front of the Chappelear Drama Center all summer while I only filled the thistle feeders at the station at the Science Center. I reactivated the Science Center feeders on Sunday, August 23 to greet returning students.

The large hopper feeder at the Science Center is one of two that I built for OWU. The second one resides in my basement waiting for an idea for its location. I would like to install it where students live and near a main artery where it could be watched as students walk from their campus “homes” to and from their classes.

The ears of corn on the hopper feeder are for Blue Jays. Blue Jays are common at my home, but so far, none of the ears of corn on campus have been pecked at. Even the resident crows have avoided the corn. Maybe, once the second hopper is installed, I believe Blue Jays will become more visible on campus.