What if we used voracious megafauna – goats – to remove invasive honeysuckle? Amur honeysuckle is an invasive species covering large areas of the U.S. The plant has significant negative impacts on ecosystems and has been extensively researched. Mechanical removal of honeysuckle is typically recommended as most effective. However, mechanical removal is difficult, time-consuming, and thus costly. Might goats be the answer? 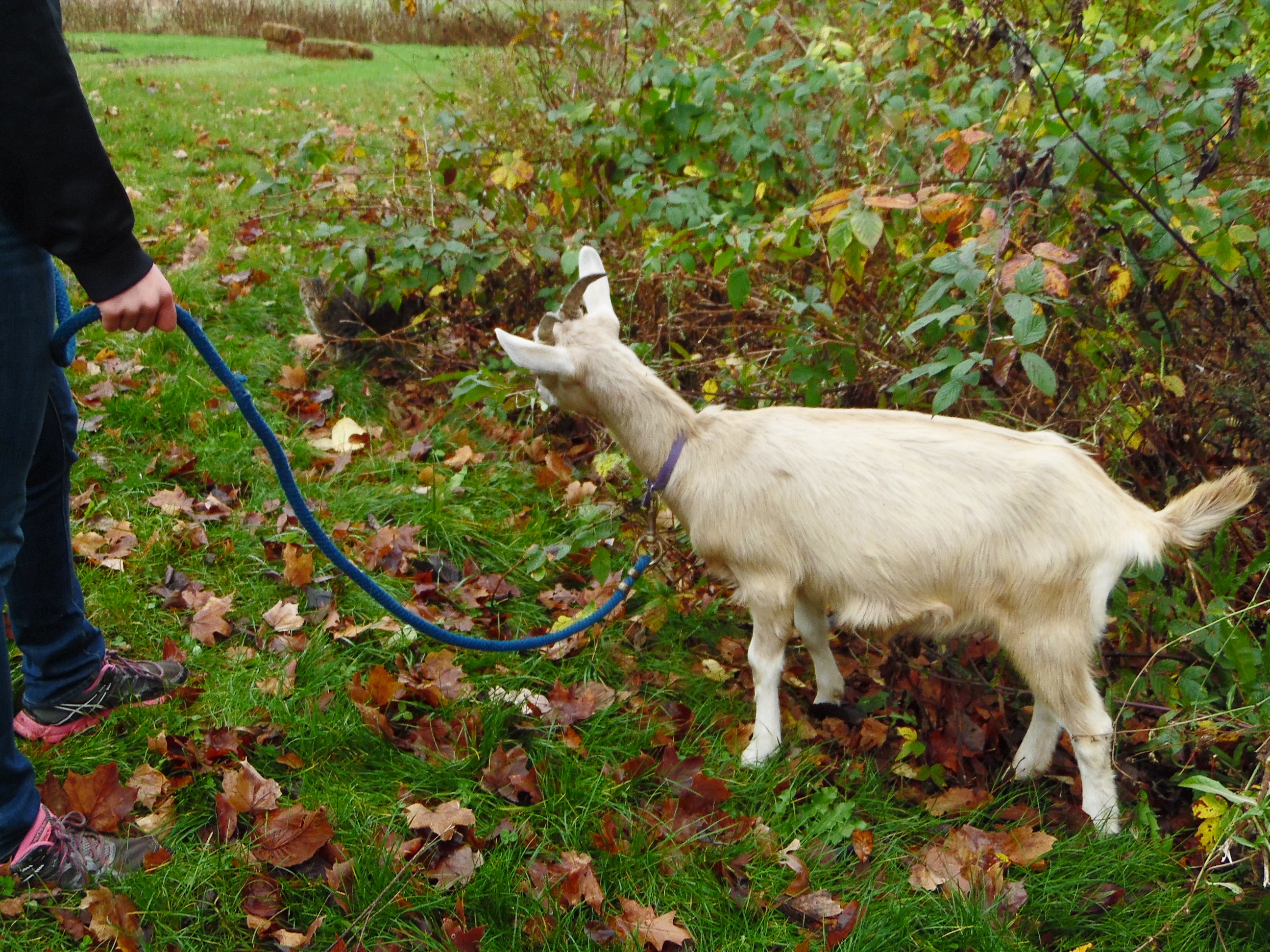 What if we used voracious megafauna – goats – to remove the honeysuckle? Inspired by stories of “rent a goat” companies (who offer goats for brush removal) I proposed an experiment to determine if goats prefer the taste of honeysuckle over other native plants. If so, then they could be released into an area to and reduce the amount of labor require to remove honeysuckle.

Methods for the removal and eradication of honeysuckle have been studied: herbicide application and removal by a biological agents are the most common. Ultimately, mechanical removal is typically recommended. Research also suggests the time of year to remove the honeysuckle, how to keep it from returning, how it affects local water quality, and to what extent it affects the biodiversity of an area.

Honeysuckle significantly disrupts the biodiversity of forests but there are few people willing to dedicate their time to eradicating this invasive plant. Love et al. determined that between cutting, mechanical removal, stump application of herbicide, and foliar application of herbicide the most effective method was mechanical removal. This is accomplished by pulling smaller shrubs by hand, or with a Pulaski if they became too big. Mechanical removal is the most labor intensive method for removing honeysuckle and is the second highest in cost due to the need to pay workers.

Honeysuckle is tagged as an invasive species in many regions and can be found in eastern Asia and North America. The honeysuckle examined throughout this study is Lonicera maackii, also known as Amur honeysuckle, which appears as a large shrub that can grow 6 meters tall. It was introduced into many areas as an ornamental plant used for its flowers and hedge qualities. The overpopulation of Amur honeysuckle is known to destroy many native species coverage and fitness. This shrub does well in the shady habitat of a forest understory and on the forest edge where it grows very fast and out-competes native plants for resources, especially when it is the first greening species in the spring and the last to lose its leaves in the fall. Amur honeysuckle spreads throughout an area by the means root systems and seed dispersion. It produces bright red berries that hold numerous seeds and are eaten by birds that eventually disperse the seeds in their droppings.

I performed my experiments at the Stratford Ecological Center, south of Delaware, Ohio using their herd of Toggenburg goats.

These species were selected because Amur honeysuckle, winged euonymus, and privet are all known invasive species of Ohio and the native species selected were some of the few that still held leaves in the mid to late Fall. The three experiments were conducted on October 30th, November 5th, and November 12th 2015 and all of the plant samples were collected the day before feeding. Because the timing is later into the fall season many of the native plants had begun to brown and lose their leaves while the Amur honeysuckle and other invasive plant’s leaves remained green longer into the season. This was to promote the best conditions when honeysuckle would be found more favorable than the other species present.

Goats are browsers that eat the foliage off vegetation, so in the first experiment the leaves of each species were pulled from the branch and placed into 5 liter feeding containers randomly placed throughout a barn pen. Female goats ranging in age were brought into the pen one at a time and given the chance to eat from the containers as they pleased. The goats eating behavior was categorized as either:

After five goats were brought through the pen one at a time the conclusion was that out of the six species of foliage available honeysuckle and winged euonymus were the most favored. Overall the invasive species were liked more than the natives, which were frequently tried and then passed by.

Following the same procedure with the foliage of each species in a 5 liter container, 2 goats were released into the pen at one time. It was clear that the goats were influenced by what the other goat had liked. If one goat would show any interest for a species the other would immediately join and eat it for at least a short period of time. Even with the two goats in the pen they showed preferences identical to each other and similar conclusion of the individual goats. The two goats appeared to favor honeysuckle but continued to return to winged euonymus; liked privet and beech equally; liked willow the least; both goats tried and moved past maple.

To continue controlled conditions in order to easily observe what the goats are showing preference for eating, for the next experiment whole branches of each species were collected and tied up to hang from the pen walls. The containers used in the previous experiment were familiar to the goats for holding food Hanging vegetation would give a more realistic comparison to forest browsing. Maple was not available for the duration of the experiments because it was difficult to collect a large enough sample due to leaf loses.

Five different goats were taken into the pen one at a time and none showed significant trends of preference. All of the goats displayed similar patterns of remaining at the first species that had been chosen and occasionally changing to a different species, trying them all in relatively equal amounts. After the first five goats were observed they were released back into the pen all at one time.

Because of the high demand for the plants the goats would begin at different species, with one or two goats sharing a particular sample. Overall the goats showed good browsing tendencies by walking around and eating all species that were available.

Experiment 3: Goats in the Field

A single goat was placed on a lead and taken to a nearby forest area. The area that was chosen had honeysuckle 2 meters tall and the size of shrubs as well as goldenrod and black berry that no longer held many berries left. Only one goat was taken because none of other the goats were accustomed to being on a lead and are not easily walked to destinations far from the barn. The goat showed no true preference for any of the species available and moved from one plant to the next without showing much real interest.

This final experiment suggests that goats (or at least the one goat tested!) are not useful biological agents for eradicating honeysuckle, to the extent that they don’t distinguish between honeysuckle and non-invasive species. Honeysuckle appeared to give no taste benefit to the goats in order to increase their favorability. Goats are known for having a palate for taste similar to a human. They avoid foliage that has high concentrations of tannins that give a bitter taste and prefer vegetation that produce berries. On the other hand honeysuckle is known for creating extremely dense thickets and this research suggests that goats would be useful to cutback these overgrown areas. Once the goats have reduced the vegetation people would be able to access the area and manually remove the honeysuckle. Alternatively, repeated early spring and late summer goat assaults on the early and late leafing honeysuckle might slow, stunt or possibly kill honeysuckle. More research is required.

These experiments were conducted with the help of Stratford Ecological Center for providing the goats and the land. Bob Harter, the invasive species management team leader, had high hopes that these experiments to show that goats preferred to eat honeysuckle because his team consisted of only two people. They were available to assist Bob pulling invasive species only a few hours a week at a 236 acre state reserve. Forming an alliance with the goats could only help. The director and farmer of the facility, Jeff Dickinson, was in fact surprised by how much the goats ate the honeysuckle equally to the other foliage that was provided. From his previous experience the goats had always shown avoidance for honeysuckle. With this new information there are future plans to use the goats to cut back the overgrown vegetation in an area on the state reserve that is bursting with honeysuckle. Once the goats have cut back the vegetation, volunteers can continue to remove the honeysuckle on the property and further restore biodiversity of the forest.