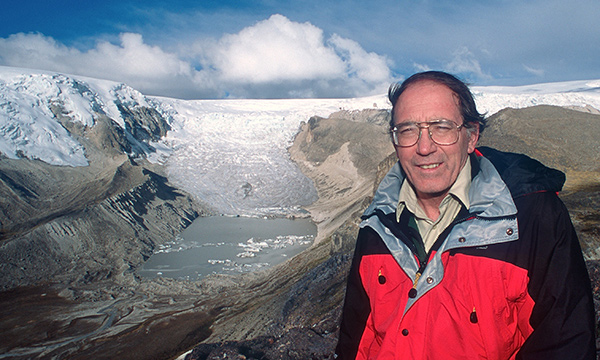 He will speak on “Past and Contemporary Climate Change: The Evidence, People, and Our Options” on Thurs., Oct. 25 (7-9 pm) at the Andrews House, 39 W. Winter St. The event is sponsored by the Central Ohio Communities Project, Sustainable Delaware Ohio & the Delaware Chapter of the Citizens’ Climate Lobby.
Paleoclimatologist Thompson is best known for drilling and analyzing ice cores from ice caps and mountain glaciers in all continents, including in the tropical areas. Miles of his ice cores are stored at OSU where Thompson works at the Byrd Polar Research Center. Closely observing and measuring ice caps and glaciers around the world, Thompson noticed they were steadily retreating and even vanishing. Ice that was thousands of years old has now disappeared. These variations were far outside normal weather and climate variability and served as proof that the world’s climate is indeed warming.
Thompson has written 165 papers (according to Wikipedia) and received countless grants, awards, and honors. In 2008, Time Magazine named him as one of the “Heroes of the Environment.” A fellow researcher, Mark Bowen, published a book on Lonnie Thompson in 2005, called Thin Ice: Unlocking the Secrets of Climate in the World’s Highest Mountains.
Born in 1948, Thompson is now 70. After a successful heart transplant in 2012, which was national front-page news, he appears to be healthy and active again. He and his wife, Ellen Mosley-Thompson, also a paleoclimatologist, live in Clintonville.